Most cells in steady-state peripheral blood (PB) are lineage mature cells, which are differentiated from hematopoietic stem/progenitor cells (HSPCs) residing in the bone marrow (BM) niche. HSPCs are rare in number and hold self-renewal and multi-lineage differentiation potential, regulating the balance and function of various hematopoietic cell subsets in the blood system. Decades of effort have led to successful transplantation of HSPCs (HSPCT) for the treatment of hematopoietic malignancies and immune system disorders. The number of hematopoietic stem cells (HSCs) is very rare, accounting for about 1/50000 of bone marrow monocytes [1]. At present, the insufficient source of HSPCs is the key bottleneck of the clinical application of HSPCs.

Due to the stimulation of SDF-1-CXCR4 signaling pathway, HSPCs migrate between PB and BM niches, and the rare migratory HSPCs circulating in PB are defined as circulating hematopoietic stem/progenitor cells (cHSPCs) [2,3]. However, there are very few HSPCs circulating in normal PB. To harvest enough HSPCs for transplantation, mobilization reagents such as granulocyte-colony stimulating factor (G-CSF) or CXCR4 antagonist plerixafor are necessarily administered to donors to mobilize HSPC from BM. Unfortunately, approximately 5-46% of donors still fail to show HSPC mobilization.

cHSPCs have the great advantages as wide sources, convenient or noninvasive collection manner, low GvHD for their patient-specific feature, and no side-effects on donors for that they need not receive mobilization agents. If cHSPCs can be used as a new source for HSPC transplantation, it will be of great significance for clinical treatment.

The understanding of cHSPCs mainly comes from homologous animals for their same immune background. The research on human cHSPCs mainly focuses on the relationship between cHSPCs and diseases. People know little about human cHSPCs for the reason of the rare frequency and the dysfunction of the expanded cells.

To obtain a sufficient amount of HSPCs for clinical HSPCT, many efforts have been made for the ex vivo expansion of HSPC population or induction of pluripotent stem cells into HSPC-like cells [4,5]. However, the low efficiency and dysfunction of the expanded cells have always been the bottlenecks for stem research.

On March 1, 2022, the research group of Professor HUANG He, President of the First Affiliated Hospital, Zhejiang University School of Medicine, Chief scientist in Blood and Immunity Center, Liangzhu Laboratory of Zhejiang University, together with the research group of Professor QIAN Pengxu of Zhejiang University School of Medicine jointly published a report entitled “Efficient expansion of rare human circulating hematopoietic stem/progenitor cells in steady-state blood using a polypeptide-forming 3D culture” in Protein Cell. In the study, the three-dimensional system formed with self-assembling peptides RGD was developed to capture and amplify rare cHSPCs in steady-state peripheral blood. Using a series of methods, the researchers explored clone-formation potential for the expanded cells in vitro, detected the reconstitution capability with an immunocompromised animal model in vivo, the molecular features of transcriptomics at bulk/single cell level, and clarified the role and mechanism of 3D system in capturing and amplifying rare cHSPCs in steady-state peripheral blood from multiple levels and angles (Fig. 1). 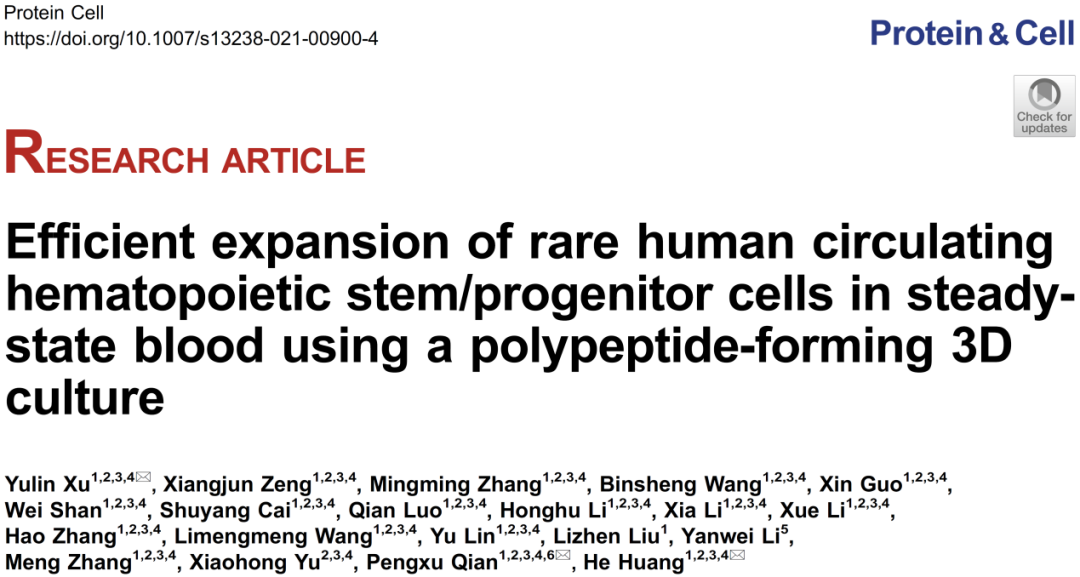 Importantly, 3D-derived cells showed similar human chimerism as mHSPCs, exhibited. Sixteen weeks after transplantation, the hematopoietic organs of the recipients were detected to have human chimerism including HSPCs, myeloid, B, and T cells similar to that of mHSPCs. Secondary transplantation assays showed the human chimerism in BM, livers, and spleens as mHSPCs did. The data suggest that 3D-expanded HSPCs exhibit remarkable in vitro and in vivo repopulating capacities.

Transcriptome analysis reveals that 3D-expanded cHSPCs are highly enriched with stemness programs. KEGG analyses validated the similarity between cHSPCs and mHSPCs. cHSPCs expressed much higher levels of HSPC-specific transcription factors (TFs) and surface markers. Intriguingly, the researchers found that TFs essential for HSC self-renewal (GFI1B, HOXA5, HOXA7, and TAL1) and surface markers (CD34, THY1, TIE2, and CDH5) were all enriched in cHSPCs. Furthermore, cHSPCs expressed a higher level of markers related to mesoderm as KDR, CDH5, CDH1, HEY2, APLENR, and SOX17, suggesting that cHSPCs might share the similar molecular signatures with the definitive HSCs. By comparing to PBMNCs, cHSPCs showed a distinct biological characteristic as chromosome segregation, DNA replication, cell cycle, and metabolism.

Finally, the researchers used the 3D system to effectively expand cHSPCs for patients who failed in HSPC mobilization clinically. The results demonstrated that the patient-derived cHSPCs held repopulation capacity in immunocompromised mice.

In conclusion, the teams developed a three-dimensional culture system to capture and expand circulating hematopoietic stem progenitor cells in steady-state peripheral blood. The expanded cells have the function of reconstructing hematopoietic and immune systems in mice. The platform provides a new HSPC source for clinical treatment, drug screening, disease modeling, and gene editing of HSPCs, especially for patients or donors who fail in HSPC mobilization clinically.